On the occasion of May 17, International Day against Homophobia, Biphobia and Transphobia, we report an excerpt of the speech by Diego Angelo Cricelli from Brianza Oltre l’Arcobaleno, associated partner in European Switch Project.

I am a transgender man and I am an activist for LGBTIQAPK+ rights.
Today I am here to ask for unity.
It is a fact that there is a part of the community against transgender and non-binary people.
We must fight together for the rights of all the people.
All the things that revolve around the word “gender” are, moreover, artfully constructed hoaxes to divide us even from within. And unfortunately it worked. 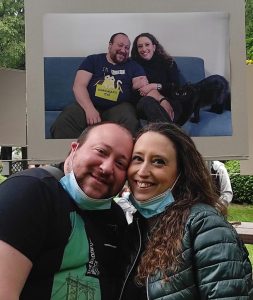 We cannot accept statements from ArciLesbica’s leader about trans women being transvestite men who want to appropriate the female world and about trans men being women who have been submitted by patriarchy and who pretend to be men to find a prominent place in society.
Gender theory does not exist. Researches on gender or gender studies are instead historical, they are not a recent discover to turn society in a big mess, as bigot politicians say.
We have always wondered about the difference between biological sex and gender identity. In fact, over the centuries, it has been discovered that different cultures in different parts of the world see transsexuality in different ways: in the American Natives’ culture transgender people seem to be like semi-gods, since they have both man and woman spirits within them and they are in fact called “two-spirits”; in Thailand, transgender people have full national health care and are not discriminated.
In Italy, despite the latest Diagnostic Manual of Mental Illnesses has finally eliminated transsexuality from mental illnesses, a transgender person is obliged to undergo psychiatric sessions in which he/she must receive the diagnosis of gender dysphoria in order to access hormonal treatments. Therefore, without being able to exercise their own self-determination, which should instead be protected and recognized.
Instead, here in Italy, the transition path is totally managed by ONIG, the National Observatory on Gender Identity, made up of cisgender people who know nothing about transition and the needs of transgender people. They decide protocols based on what they think is best for us.
But for trans people and about the needs of trans people, trans people are the ones who have to speak up.
The same overdetermination is suffered by intersex people, who at birth have genital physical characteristics not attributable with certainty to the male and female genders, by doctors, who push parents to choose a defined sex and therefore to have a newborn operate on the genitals within a few days, if not hours, from birth.
This barbaric practice implies for the person very heavy unwanted hormonal treatments and, often, living a life in a sexuality that does not belong to them, as it is imposed by others and therefore having to undergo, again, heavy hormonal treatments and new operations, which however, they will not be able to eliminate the initial error and a life of unprecedented suffering.
It is therefore essential to prohibit an intersex person’s gender from being chosen by anyone other than the person him/herself.
Finally, if the so called “Ddl Zan” will pass on Italian Senate debate, will also introduce protection from hate crimes on grounds of gender identity and therefore also the protection of transgender and intersex people.
Recognizing the rights of those who are denied does not mean taking them away from those who have already recognized them. Instead, it means being a civil and inclusive society.